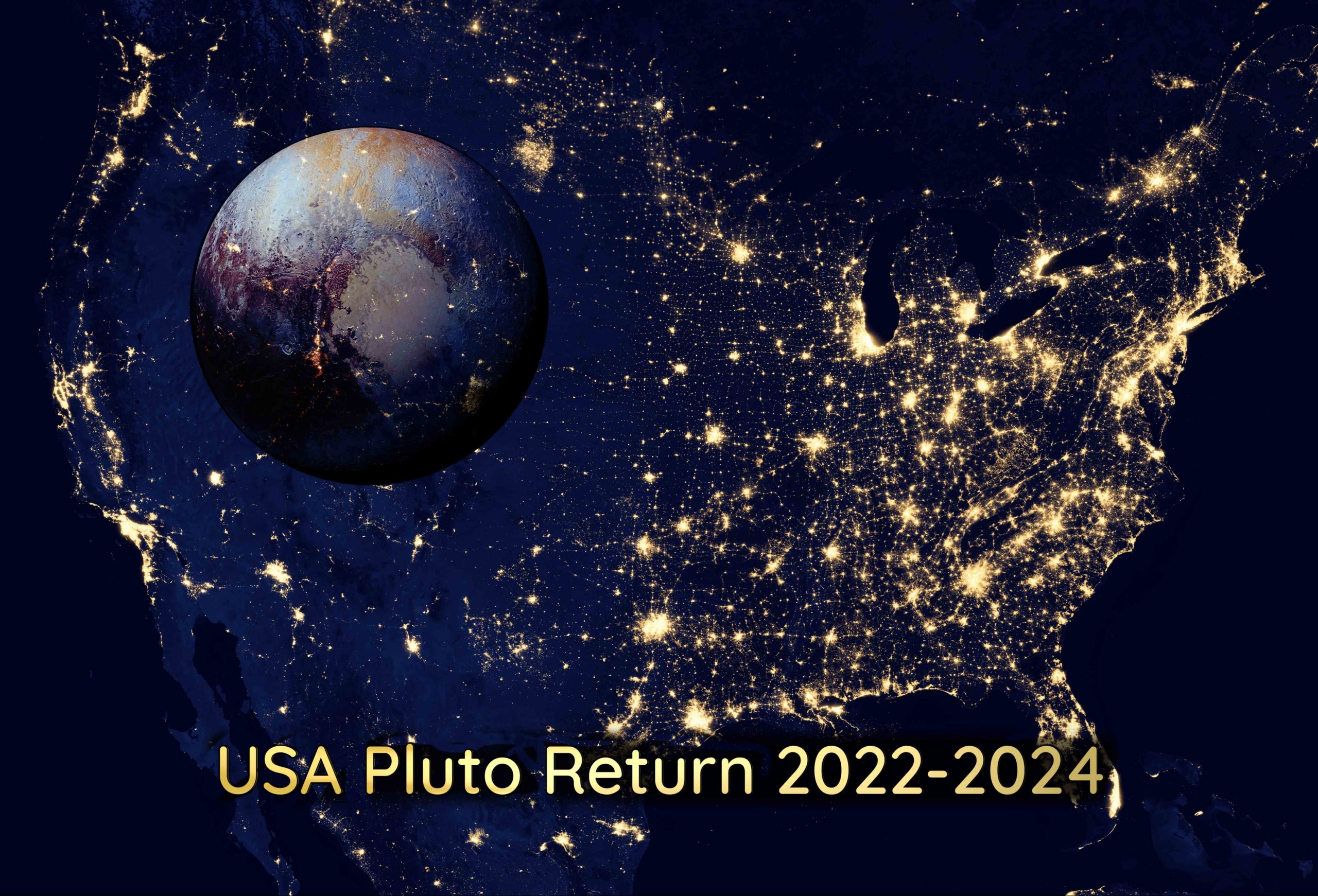 ***come join my STARGATE MYSTERY SCHOOL- starting april 19th, 2022. a year and a day through the stellar gateways. this deep dive journey will be epic!!!! for more information click here- https://divineharmony.com/astrology-blog/stargate-mystery-school-starts-march-19th/ 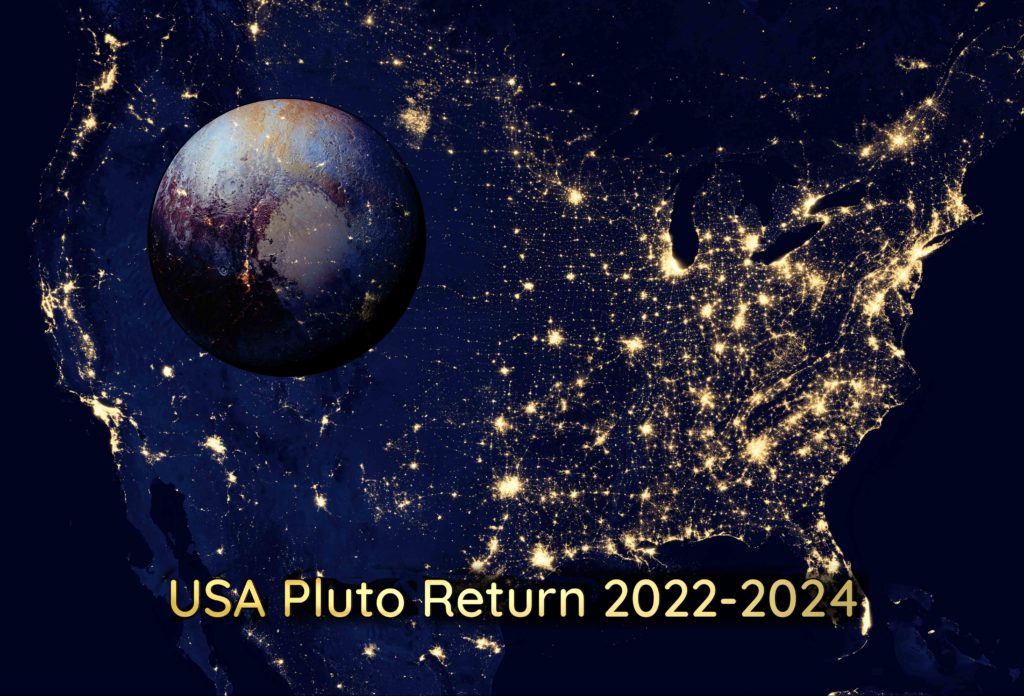 The United States of America has a very profound Planetary Return incoming in 2022- the return of Pluto the Lord of the Underworld and God of Death and Rebirth.

People do not get Pluto Returns (unless they live for 246+ years!) but countries do. As Pluto is one of the furthest bodies we know of out at the far reaches of our Solar System he symbolizes all that lies outside of consciousness and that which is in the shadow.

A Pluto Return in the chart of a country is an amazing opportunity for rebirth- but first comes the death of all that is old, toxic, patriarchal and old paradigm. It is a time of reckoning with all that lies in the shadow. Add into the mix the presence of Eris- the new body discovered in 2005 and the archetype of the 21st century- and we have the two furthest planets excavating and activating all that is unresolved in the American psyche. If you have ever gone into therapy you know that pulling back the veil to reveal what is hidden in the Unconscious is no walk in the park. But you also know that this is the only true path to healing. Pluto return represents a profound opportunity for healing and awakening- not just for the USA but for the whole world as we are all interconnected.

Pluto is the Higher octave of Mars- representing the Higher Will and Higher Power. Yet before we can access this Higher Power we have to move through the eye of the needle that Pluto and its sign Scorpio represent. We need to face our fears or obsessions with money, power, control, sex and death. Pluto is the Gatekeeper and in many mystical traditions we need to face our deepest fears before we can pass through the gateway into Enlightenment. The USA has an opportunity to rise into the next level of consciousness as a country and world leader- but what must be left behind is the shadow of Capricorn expressed as corporations running politics, misuse of power, corruption, shadow government, and being stuck in matter while having lost consciousness of the Mother.

A return to the Mother is required- not just in the USA but in the entire world and collective consciousness. The current patriarchal structure is based on a male dominator God and it is missing the Divine Partner of God- the Divine Mother. There is Mother and Father, heaven and earth, heart and mind, Soul and Spirit. One cannot be without the other- they are both needed for Wholeness. A big part of Pluto’s return will be about demolishing structures, ideas, beliefs and traditions that have negated and dishonored the Divine Feminine. The Feminine is not just expressed through women- it’s expressed through how we treat the earth and the environment, how we treat children, the elderly, people of color and animals. It is within each of us- no matter our gender- and expresses itself in how we relate to our emotions, how we display empathy and how open our hearts are. The lost Sacred Feminine is symbolized in the Grail Myth- where the Fisher King is dying in a wasteland and only the Grail (the Divine Feminine) can save us from total and utter destruction.

The USA is an amazing country and our success was built on taking lands from the Native Americans, Native Hawaiians and the Eskimos. Our magnificent country was built by slaves who came from Africa. We cannot move into the future until we have fully dealt with and atoned for the past. The dominator archetype has come full circle and it must die. Pyramids with a few elite at the top and many suffering at the bottom do not work. We need to move out of this level of consciousness and into a consciousness that synthesizes, includes, unifies and works together in collaboration. This is the true meaning of the Age of Aquarius!

America needs to do Shadow Work- which is all about dealing with the unresolved trauma and wounding that informs our present due to it being a pivotal part of our past. It is time to deal with the consequences of past actions- karma is ripe and coming home to roost which means it is coming to fruition and is ready to be dealt with. This Pluto Return portal of 2022-2024 is followed by transiting Eris square natal and progressed Pluto from 2033-2048- with the final ingress of Progressed Pluto into the 1st degree of Aquarius on July 1st 2050. We can see this entire period of time- 2022-2050- as one massive transformational portal for the USA and for the World at Large. May we lead from our hearts and choose our actions wisely- we are creating the future with the decisions we make in the present and the dealing with and completion of our past.

The United States natal Sun is in Cancer- the sign of the Mother- conjunct the powerful fixed star Sirius associated with the Divine Feminine in ancient Egyptian mythology (more recently Isis but previously Sopdet a more ancient Goddess). As the North Node of the USA chart is Leo- the Sun is connected to the destiny of our country. Yet the Sun is square Saturn- ruler of the South Node. What are the karmic patriarchal patterns that hold us back? Pluto Return for a country is similar to Saturn Return for a person- they are both times of coming of age. The United States is a young country- and this can be seen in our rebellion, independence and innovation. But just like any teenager needing to grow up- we also need to deal with the past and take responsibility for what has come before.

Pluto Return offers an opportunity for Transformation of our Nation. We have the potential for massive change but also resistance to those changes by the powers that be. The old guard is holding onto the past- and the new revolutionaries are ready to lead us into the future. There is a battle of the old and the new, the past and the future, safety and a leaping into the unknown!

The United States was built by those who wanted to break away from a patriarchal culture- much like the myths of Uranus, Saturn and Jupiter. Saturn was the son of Uranus and he usurped power from his Father because his father was controlling his Mother and not allowing her to birth her children. But Saturn then became the dominator he usurped and his son Jupiter had to usurp power from his father Saturn who ate his own children. Mythologically this is the story of the Karma of the Father Line and the United States has an opportunity to change this Karma. I call it “Passing the Patriarchal Poison”.

The key to changing this and transmuting the poison into the cure is honoring of the Mother and Shadow Work. To move into the future we must honor where we came from and deal with the poison of the past. Doing this will lead the United States into a new chapter and will help anchor the New Age of Aquarius that has been birthed and is growing on the planet right now.

this is the Lunar Gate Call for the New Moon in Sagittarius. Gate Calls are membership content and from time to time i share them publicly - as i am...

happy Black Sun Portal to you! i am having a Black Sun/Black Friday Sale on all my class series and masterclasses in honor of the auspicious New...

the Great Black Conjunction of Black Sun and Black Moon ✨🖤✨

we are in the midst of a series of conjunctions of the Black Sun and the corrected Black Moon- also known as the Black Lights. their conjunction is...