the full moon at 2’31 scorpio is exact on thursday april 21st 2016 at 10:23pm PDT, marking the midway point of the current lunar cycle we are in that began with the new moon in aries on april 7th. it’s interesting to note that the new moon and full moon of this current lunar cycle are governed by mars and pluto respectively- the two planets that just slowed down and stationed retrograde on the 17th and 18th. when planets are retrograde they are more inward, reflective, introspective and spiritual. yet the shadow side is they are also limited, restricted and frustrated- sometimes in excessive, depressing or irritating ways. the new moon in aries wanted to DO SOMETHING NOW! yet mars retrograde reminds us we cannot do anything new until we have dealt with the old and the past. the full moon in scorpio is bringing light to all the shadow dynamics that lie underneath the surface- the very things we don’t want to look at or have been avoiding dealing with are likely to come to Light right now.

it’s interesting to note that the full moon is conjunct juno- the asteroid Goddess of partnership and marriage. so there is a focus on relationships, commitments and contractual arrangements with others- as well as our personal commitment to ourselves, our own growth and evolution and navigating the shadow dance with as much consciousness as we can muster. the only aspects the moon makes- other than an opposition to the sun (which always occurs at the full moon) are semisquares to saturn and the north node. in fact the full moon is at the midpoint of saturn and the north node- which is pretty potent on many levels. saturn speaks to our path of growth and mastery but he also speaks to karma and where we stay stuck out of fear or addiction to our limitations. the north node speaks to where our evolution and growth is, but it is not the easy growth by any means. the north node path is where we are pushed out of the nest and we have to figure out how to fly falling down. both saturn and the north node push us beyond our edge- and it’s not the comfy, cozy familiar space we are used to. many of us spend a good deal of our present lifetime resisting our saturn/north node growth- and yet it’s only when we get aligned with it that we will start to evolve into new directions, dimensions and frequencies.

the rulers of the full moon are actually mars AND pluto. pluto is the contemporary ruler of scorpio and mars is the ancient ruler- so both of these bodies are important when we are looking at the full moon energies. mars is the lower, egoic will while pluto is the Higher Will. ultimately our growth and evolution depends on our ability to surrender the former so that we can align with the latter (or another way to look at it is having the former be in service to the latter). our lower will thinks it knows what it wants and needs- but our Higher Will actually does know and can see the entire picture.  there are times when what is actually for our best growth and evolution is not what our ego wants and maybe even what our ego fears- but until we move through that fear and rise above it we will stay stuck in the lower self, resist the growth experiences we need and stay stuck in our evolution.

another notable feature in the full moon chart involves venus in aries. she is aligned with rebellious uranus and activating eris, opposite the fierce and powerful Dark Goddess black moon lilith and square to pluto the Lord of the Underworld. this shows that wake up/shake up, breakdown/breakthrough energy is playing out in relationships, financial situations, in our value system and more. venus in aries wants what she wants and she wants it now! add in all the potent planets she is aspecting and we can see her boiling over with passion, anger and intensity! steering clear of power/control dynamics with others and instead using this energy to dig deep and get to the root of patterns playing out that are Sourced within is the only way out and through.

we also have mars retrograde aligned with saturn retrograde- a doozy of an aspect that is actually not exact until august 24th. yet because both of them are in sagittarius and retrograde to boot- the sadge areas of our charts are undergoing major reconstructive surgery! this is not a time to act impulsively or restlessly or to react out of anger- but instead a time to reign it in, think of the long term consequences and get your lower will aligned with your Higher Self and it’s trajectory. mars and saturn square square neptune and jupiter- which can bring a tendency to want to see what we want to see, believe the lies we tell ourselves and stay addicted to fantasy. both jupiter and neptune like to see the glass as half full, sometimes to the point of ignoring the shadow!  but saturn knows that nothing can truly change until we can see and face reality- and we need to be able to do this by looking within first as projecting what is empty/missing/not working within onto others without will never truly bring us to the radical shifting point we so desperately seek.

ellias lonsdale’s star sparks meditation (quite different than his other version ‘inside degrees’) is right on point with this full moon energy. the entire meditation is listed below but in short the title says it all- “Pigs being fed”. the “pigs” are our lower selves and ego identities. we eat crap and just keep stuffing ourselves with crap because inside we feel empty and we think it will fill us up. we are scorpio obsessed about filling ourselves up, getting our needs met and being fulfilled (money, food, sex, comfort, security, power, control)- but we don’t realize we are coming at it from the wrong perspective. ellias talks about how this type of consciousness looks without for what can only be found within- and it becomes a compulsive feedback loop and the more we go around it the further we entrench ourselves into these toxic karmic behaviors, attitudes and belief systems.

this star sparks image brings to mind mass consciousness and makes me think of a poster i once saw where all the white sheep were going one way and the single lone black sheep was going in the opposite direction. this full moon is about looking at where we allow ourselves to get sucked into mass consciousness, where we keep going back to our default and where we keep getting pulled back into the karmas and patterns we have been playing out- collectively and personally- perhaps for lifetimes. we have to get to the root and the Source- so we cannot project this out and make it about others or the world around us. each and everyone one of us has to take responsibility for our part- for buying into the lie and into the system, or for selling the lie and being part of the system. as it’s only when we can see this piece that we have enough conscious awareness to do something about it.

the last line says it all “There is great hope that can come out of the confrontation with the old outward stuff and the ways it leaves us cold and barren.”

so use this full moon to confront all the old outward stuff that leaves you cold and barren- in your personal life, in the collective, in relationships, in the media and more. being willing to see where we have been stuffing ourselves like a pig and acting from our lowest self frees us to rise up Higher. evolution only happens when we can see, deal with and complete the past. so don’t run away from it too fast and attempt to spiritually bypass it. the astrology right now is all about going back so that you can eventually go forward- one step forward and two steps backward at a time.

If we are ravenous, it’s only because we haven’t been fed what we really need and we’ve become accustomed to substitutes. The outer has become our obsessive focus. The inner has lost out to what shows up as urgent, gotta go here, gotta make it work there.
We live through the external to such an extent that our soul starves and we rarely recognize the symptoms. It starts with telling ourselves stories about what is happening and who we are, stories which are old, stories which we have told so many times before. Then it gets much worse when we institutionalize and crystallize the patterns as fatalistically assumed to go that way every time. Now we really are generating a runaway world with a self hiding from itself everywhere.
The compulsive feedback loop of the external has to be unhooked. The habitual turning toward doing it the same way again needs badly to be overturned. But how can we turn these matters around when they are the very stuff of our lives, the glue that keeps us together?
Well, we have to get fed up to such an extent that we touch once again that raw place of burning need for substantiation, for embodied heart forces to prevail somehow somewhere. And then we will begin to discover that none of this is happening to us, all of it is our own way to perpetrate the syndromes that seemed to offer safety and security, comfort and stability, ease and familiarity.
We have bought the system, the lie. We have fallen for the semblance version. No matter how far we took it, it still turns out to be empty and void. The Old Earth can’t feed us enough lies and promises to keep us going in times of radical earth shifts, the ones which our body is right in the midst of and powerfully channeling.
There is great hope that can come out of the confrontation with the old outward stuff and the ways it leaves us cold and barren. 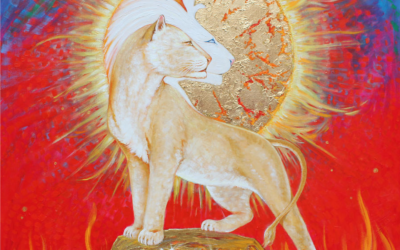